It is a lesser known fact that I have a ‘thing’ for Ancient Rome. I will watch pretty much any film conserning the period. I am not very well versed in the history aspect of it(which I will have to change soon), but the clothing, culture, and general debauchery of the period really gets me going. Especially Centurions and slave girls. 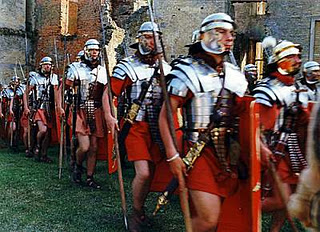 So I just finished the first season of Spartacus. Arguably THE most gory show I have ever watched. The plot unfolded into very dramatic twists and turns, each more shocking than the last. I found the multiple ‘slow motion stills’ a la “300” rather annoying, but all in all quite riveting and fun show. Perhaps my favorite part was all the slaves, and the Lord and Lady of the House being called “Dominus” and “Domina” respectively.

The slaves wore simple leather collars and wispy bits of cloth, with looked equally sexy on men and women, and the more high born men and women didn’t wear much more, other than plenty of jewelry.

One day I will have a roman bath with delicious slaves girls to wash and attend me. I wouldn’t mind a couple hunky male slaves to do the heavy lifting either. 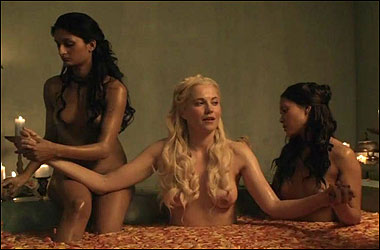 How sexy, right? The show is quite gratutious but hey, it’s got zero calories! Did you know that slaves in Ancient Roman text are referred to in lowercase and their Masters in uppercase? Nope, the habit wasn’t invented on the internet.